The Isthmus is from ancient times the eminent strategic point of Greece and one of the most important of the Eastern Mediterranean. The task of opening the canal was emblematic, a construction dream, a challenge that made 2300 years to create. The aim was to shorten the sea route between Eastern Italy and the Aegean Sea, avoiding the time-consuming and dangerous bypass of the Peloponnese, thus solving many problems (naval accidents, transport costs, insurance, fuel, time) and facilitating navigation and trade.

Periandros, the tyrant of Corinthos, was the first who thought opening the Isthmus (602p.Ch.), but he abandoned the plan rather quickly fearing the "wrath of God", the enormous technical difficulties and the financial interests of Corinthos which were satisfied until then by the passage of ships through the Diolkos.

Well thought out effort was made by Neron (66m.Ch.). Based on the plans of Julius Caesar and Caligula he seemed determined to carry out the work. Operations began in 67 AD from both ends (Corinthian-Saronic Bay) and thousands of workers were engaged. The beginning of operations was made by the emperor himself on November 28, giving the first blow in the land of the Isthmus by using a golden pickaxe.

Herod Atticus, the Byzantines and centuries later the Venetians attempted in vain to finish the project. Also, the governor Ioannis Kapodistrias was unable to find in the international money market the amount of 40 million gold francs, needed for the opening of the canal.

It took however many years to implement this ambitious plan. In fact the same date the inauguration of the Suez Canal was celebrated, on November 17, 1869, the Greek government Thrasivoulos Zaimis voted for the relavant law, by granting the construction and management of the project in French engineers, who then founded the company «Societe d 'etudes du canal maritime de Corinthe».

The first projects are starting to appear, and on May 4, 1882 King George declared the beginning of excavations. The project was advertised enough, however, it required the crucial intervention of a great Greek benefactor to complete, Andreas Syngros, who founded in May 1890 with his own funds the "Company of the Corinth Canal" in order to bring out this massive project, which was finally completed in 1893 by the prime minister Charilaos Trikoupis.

This economical venture, this technical feat, using 2,500 workers and the best mechanical means of the time, was completed after 11 years. On the morning of July 25, 1893 Andreas Syngros in a brilliant ceremony, delivers gold scissor to the Queen Olga in order to cut the blue and white strip and the first ship engaged traversing Canal is the royal ship "Sfaktiria". One of the most important infrastructure projects in the history of Greece became true.

The canal cuts at straight line the Corinth Canal in length 6.346m. The width of the sea surface is 24.6 m., and the bottom is 21.3 m., while the depth ranges between 7 and 8 meters. The total volume of soil that was extracted for the construction reached 12 million cubic meters.

Since the opening of the canal, it remained closed for four years due to huge landslides and the period from 1944 to 1949 when the German occupiers during their retreat blew up the railway bridge, causing large land depression. The restoration work lasted five years.

Today the Corinth Canal is an international marine transportation hub and serves annually around 12,000 ships of all nationalities. 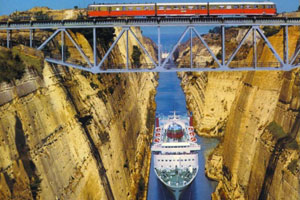 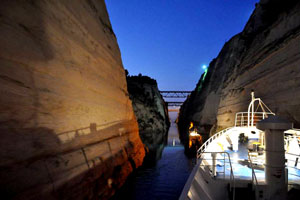 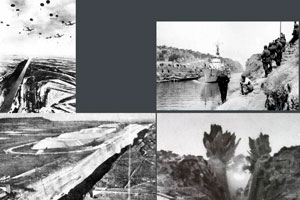 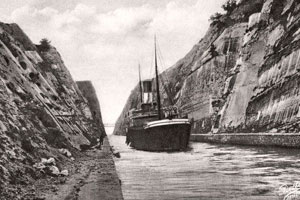 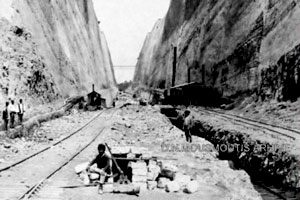 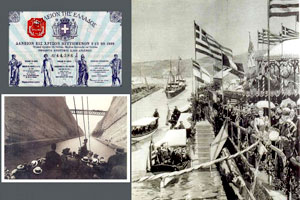 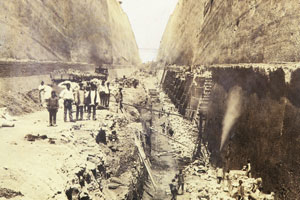 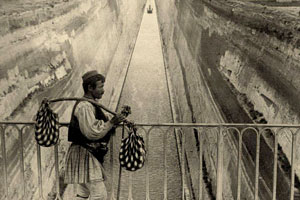