Diolkos was one of the most important projects of engineering of the ancient Greeks. It connected the two large ports that existed in ancient times, the Kechrees (Saronic Bay) and Lechaio (Corinthian Bay).

In order for the ships to avoid the circumnavigate of the Peloponnese and due to the risks faced by seamen in raging Cape Malea, it was constucted in the early 6th century by the tyrant of Korinthos Periandros, a road paved with blocks of cut limestone, about 3,5-5m width, dressed in wood, on which the era ships were slid spread with fat to move from one end to another. Two grooves existed in the middle of the width. The distance between the two grooves was 1,50 m. they were called «olkos» and their aim was to prevent the platforms with ships from derailing, especially at the turns, concerning the far route and the fact that the road meandered between hills. From these two grooves (olkos) the street took its name (Diolkos).

The start of Diolkos was at the Corinthian Bay, where today stands the beacon for ships and ended up to the Saronic Bay, the current Kalamaki of Corinthos (ancient Schoinounta). It did not follow a straight line, but it had turns because the soil was quite slope, at an altitude of 90 meters, so the transportation of ships was particularly difficult. It seems that the ships were dragged by slaves, because no traces of animal hooves or machines were visible after the excavations. Merchant ships were not transported loaded, but the wares were unloaded to Kechrees or Lechaio, depending on their direction.

Ancient Diolkos was being used for several centuries and the expensive charges (tolls) for the passage paid in Corinthos was the most important revenue of the city. 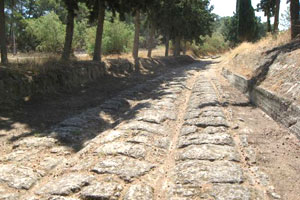 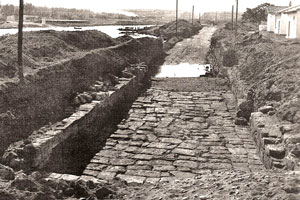 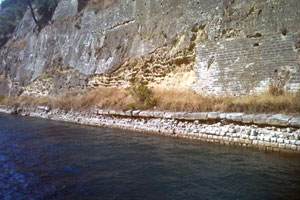 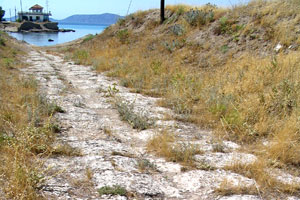